Towards An Asia Floor Wage 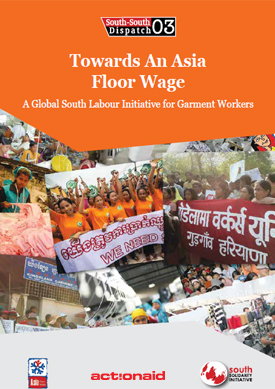 While the macro-data for emerging economies shows rising GDP and wealth, there is also the concomitant and consistent rise in inequality and stagnation of real wages. In India since the start of neo-liberal economic reforms in the 1990s, multinational companies have firmly established their presence and benefited greatly, but for a vast majority of workers producing for the global market, things have gotten worse in terms of wages and working conditions.

It is this context of globalised production existing with poverty wages that informs the establishment of the Asia Floor Wage (AFW) Alliance. The Alliance was founded to formulate and demand a living wage for Asian garment workers in keeping with the political economy of the global garment industry. It began within the Asian context because Asia produces most of the world’s clothing. It sought a regional strategy to counter global capital’s tendency to divide labour through the threat of relocation and pursuit of the cheapest labour. The Alliance’s effort is historic because this would be the first time a wage consensus was being sought across national borders and posed as a demand within a global industry. The Alliance believes that setting concrete, achievable standards and building workers’ negotiating power are two key pillars for decent work. It believes that strategies must include building workers’ unity across divisive barriers such as national borders, formulating unifying demands for decent work standards, building unions and bargaining globally.