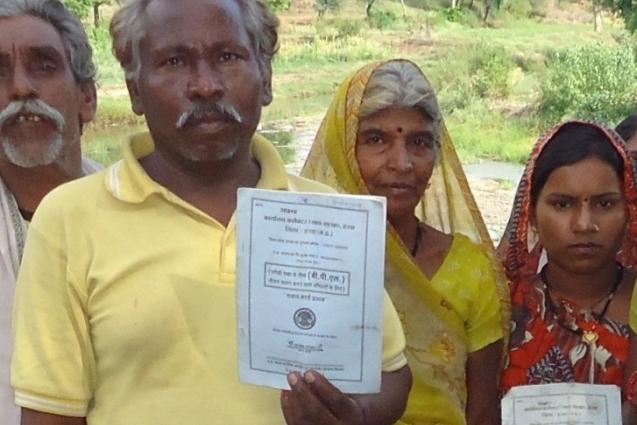 Dalit communities in India have been historically deprived of their rights over land even though almost 75% of them primarily depend on land for their survival. DAA started work as a movement by Dalits to gain their land rights. In addition to spreading awareness on land rights, DAA and ActionAid organised various campaigns with marches and protests, as well state level meetings to advocate for better implementation of government policies granting land rights to Dalits.

Keshav lives in Aalampur village with his wife and four children (two of whom are grown up and married). He earns his livelihood as a carpenter and his wife works in the fields to earn additional money. In his there are 150 Dalit families, but 35 of them were not registered under the BPL (Below Poverty Line) list of government which is a requirement in order to avail of government benefits, so Keshav along with others in the community came together to discuss these problems and take collective action to solve the same.

“DAA workers told us about the ration card we can get so we can avail of subsidised food (grain, sugar, kerosene, etc.) from the government fair price shop. But to get the ration card one has to be included in the BPL list. In our REFLECT circle we discussed this problem. So we decided we will take help of our community organisation to fill the forms and submit application for the 35 families. After giving the applications, we followed up and now, the remaining families have also been registered under BPL and they can get their rations like us.”