Power Of One: ‘Netaji’ Vibhuti Chauhan 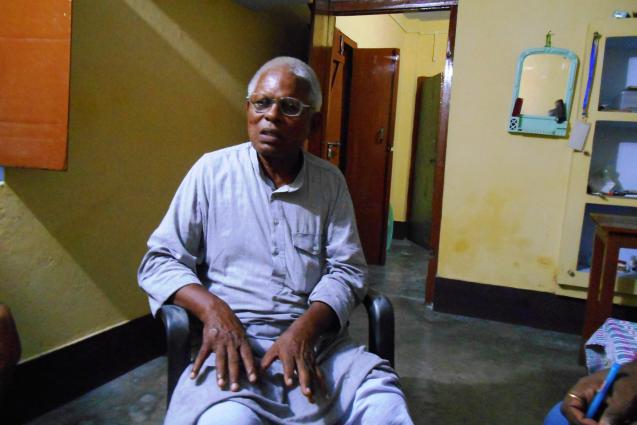 What made Vibhuti Chauhan find within him such a strong empathy for a community that was barely recognised as part of humanity that he waged a four-decade-long struggle for its rights? After all, neither were the Musahars politically significant, nor was he himself from the community. Perhaps it began with that first encounter with injustice in the raw, when wages due to some Musahars remained unpaid and Chauhan, as a young man inspired by social democratic principles, demonstrated for justice outside the SDM’s office.

“The first thing that struck me about the Musahar community when I started interacting with them in the 1970s was that hardly anyone knew of its existence – certainly not the officials. As for the Musahars themselves, they did not know their rights, they did not even know the significance of Independence Day, or that a Vidhan Sabha (state assembly) existed. They lived in broken huts, with nobody bothering about them,” recalled Chauhan, now in his mid-sixties.

The other aspect that became quickly apparent to him was the severe repression they faced, particularly from the upper castes and landowning sections. The initial empathy he felt for the Musahars now turned into something deeper: a commitment. Said Chauhan, “I began spending more time with the community, sleeping in their huts, eating their food, witnessing for myself the daily humiliation they faced. I decided at that point that this is the community for which I will work for the rest of my life.”

The community responded to him with affection and trust. The fact that they began to call him ‘Netaji’, or leader, testified to their confidence in him. Said Ram Vilas, a Musahar who is also the programme coordinator of the Musahar Vikas Pahal, “Through Chauhan saab we came to realise many issues. He guided us throughout.”

Land and dignity – these were what the community needed most of all. Chauhan assisted them in getting their loans written off and taught them how to petition the authorities for ownership of ceiling land. The process was slow and often accompanied by violence. Any attempt at organising the Musahars or demanding justice for them was met almost immediately by aggression. Hamlets were flattened and houses set on fire, as landlords deployed their goons to unleash intimidation and terror. In this already unequal battle, the police often openly sided with the powerful. Chauhan has himself faced police firing and still carries the marks of these encounters on his body. But the traumas and tensions, notwithstanding, he remained steadfast in his purpose.

Chauhan described the coming of ActionAid into the region for the first time in 2001 as a “strong wind of change”. As the Musahar Vikas Pahal took shape in eastern Uttar Pradesh and began representing the Musahars, with Chauhan himself as one of anchors of the process, the critical issues were clear, and ranged from violations of Scheduled Castes and Tribes (Prevention of Atrocities) Act and social recognition of the community, to land rights for the dispossessed.

However, there was a change of orientation to be made and Chauhan recognised this, “Once ActionAid came into the picture we had to understand the government system and learn to work within the constitutional framework. Earlier, we had perceived the administration as our enemy. Now we had to learn to enlist its support and sometimes link our work with that of the government. Whereas earlier we would resort to taking up our lathis, we now had to ensure that the authorities took action. We had to understand the laws and how to make use of them.”

The central issues of land and dignity, however, remained. “With ActionAid’s close involvement, we worked with the community to strengthen their understanding of their own rights. We taught them how to speak as equals with officers and interact with them. We ensured that men and women could speak to a minister without fear. We were always there when they faced difficulties but they had to understand that it was their struggle.”

Today, according to Chauhan, the fear of the powerful that once haunted the mind of the Musahars has ebbed. “Of course, change doesn’t happen in a day. The process of gaining equality takes time. But now even women can speak to an SP on the phone. I, who have seen them before this process began, can clearly perceive the difference. But this process is far from over. Only in name have the rajas left us; it will take much longer to shake off their exploitative grip on the Musahar community.”