“SHE IS OUR WATCH TOWER”: PUSMA’S BATTLES IN THE TEA GARDEN 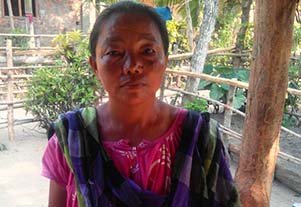 Pusma Mangar, Chaibasa Line, Bundapani Tea Garden, Alipurduar, West Bengal, is a 47-year-old tribal woman who lives in Bundapani, a closed tea garden in the heart of the Dooars region in West Bengal with her husband and 23-year-old daughter. Bundapani is not an exception; it is only one of the numerous closed tea gardens in the area. Malnutrition, unemployment, trafficking and school dropouts are daily occurrences in this abandoned tea garden.

Pusma Mangar joined the Beti Zindabad campaign focusing on human trafficking and early marriage. While doing this campaign she took the help of Sima Sashastra Bal and the local panchayat. Realizing the importance of livelihoods, she started working on alternative options such vermicomposting and knitting with the help of ActionAid India and its local ally G-NESEP. She involved five women in vermicomposting to strengthen their economic base. Pusma Mangar knew that trafficked girls and women do not get a proper social response for reintegration, so she involved three trafficking survivors in knitting. Today, nineteen women are
involved in sewing work because of her.

Pusma Mangar is loved and respected by the people of Bundapani garden. Bundapani is an inaccessible place for many reasons like flooding and elephant attacks. Thus it becomes difficult to ensure medical treatment, especially during pregnancies. Pusma Mangar says, “I have taken nursing training and supported more than 20 birth deliveries in our garden.”

Many children in the tea garden are illiterate due to a lack of facilities, poverty and other factors like lack of attention by their parents, migration to other cities for jobs etc. Alcoholism is also a serious problem in the area. In such circumstances, Pusma Mangar has taken the responsibility for the education of children needing support.

Seventeen children are now being supported by Pusma. She often conducts door-todoor campaigns to make villagers aware of the importance of education and encourage them to send their children to schools. Sibraj Rai, Pusma’s brother said, “There was a parent-teacher meeting at Bundapani primary School where a teacher Bhaskar Lohar acknowledged that the presence of tea garden children is about 70% only because of Pusma Mangar who herself had admitted many students.”

The PRI representative of Bundapani Panchayat said, “She is our watch tower. There are tube wells in the garden because she has gathered labourers and gone to the local government officials to bring attention to the water crisis. She alerts us whenever there is a delay in entitlements like NREGA, Financial Assistance to Workers of Lockout Industry, State scheme to provide cooked food to old persons called SAHAY PRAKALPA.