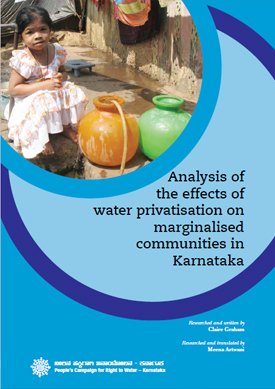 This is an independent study to document the experiences of people in cities of Karnataka where the operation and maintenance of water has been privatized.

This study is aimed at documenting subjective, life experiences of a small number of people in each of the four cities with privatized water supply. A line in the preamble of the pro-privatisation ‘Urban drinking water and sanitation policy – 2003’ says that the policy was made to ensure universal access to water in Karnataka. This study will enquire, through individual stories, if water privatization in Karnataka stands true to the claim of providing universal access to drinking water.