Towards creating a fair and just world for people dependent on the informal economy! - ActionAid India
+91 80 25586293

Towards creating a fair and just world for people dependent on the informal economy! 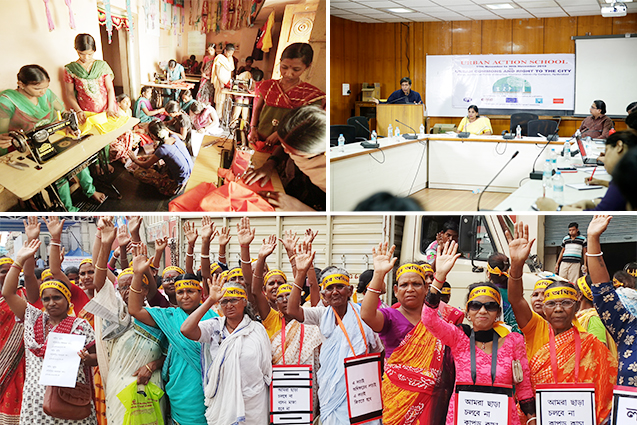 The worlds of work for majorities of Indians is full of fragility and vulnerability. Ever-increasing flexibilities in the labour markets push workers into further vulnerabilities with regard to wages, “working conditions” and “bargaining ability”. The vast majorities of our workers in India, over 93% of them, fall in the category of the “informal sector” – with no regularity of wages, measly, if any, forms of social security and rights, and little prospect of joining the ranks of regular wage workers. Women make a disproportionately large segment of the informal sector, in marked contrast to the falling figures of labour force participation of women in India. Trends indicate that the displacement of women from formalized workspaces will continue and their presence at the lower ends of the value chain will increase due to historical denials in access to education and technology. Women workers are forced to perform more labour-intensive tasks, often without remuneration, remaining unseen and unrecognized.

We need to create a fair and just world for millions of wage workers. For this we need to establish a constitutionally enshrined and justiciable “right to work”, a decent wage promise with provisions of indexation. The labour laws regime should unequivocally ensure equal wages for equal work; the recognition, reduction and redistribution of unpaid care work of women; and a universal social security cover with social security and right to food, education, health, shelter, decent work, pensions, maternity benefits, life and disability cover. The responsibility for preparing and embracing the future also needs a transformational investment and work on education and skilling on high end jobs to prepare our youth for a decent future in the worlds of work.

It was with this perspective that ActionAid Association, with support from the European Commission, ran a multi-pronged project entitled: “Securing rights and sustainable livelihoods through collective action and education for people dependent on the informal economy in India.” Through the project and with the collaboration of a number of allied civil society organisations ActionAid Association worked with communities and workers to empower people dependent on the informal economy through providing information on and access to basic rights for decent work and social protection; providing training in basic life skills and vocational skills to access livelihood opportunities and improved livelihood opportunities and helped collectivise different categories of workers so they could assert rights and claim entitlements. The project ran from March 2015 to February 2019. It covered 32 cities, 18 districts and ran across 15 states of the country – namely – Andhra Pradesh, Assam, Bihar, Delhi, Gujarat, Jammu & Kashmir, Karnataka, Maharashtra, Madhya Pradesh, Odisha, Rajasthan, Tamil Nadu, Telangana, Uttar Pradesh and West Bengal.

The engagement involved three integrated strands. The first strand aimed at increasing awareness on socio-economic rights and entitlements to decent work and mobilizing people dependent on the informal economy to claim those rights. The second one was aimed at enabling young women and men to gain life skills and vocational skills, improving their access to decent work opportunities and increasing incomes. The third strand was aimed at developing an understanding of the context, the history and practice of policies related to people working in the informal sector, both within India and internationally, in order to better frame, analyse, monitor and implement them.

We are happy to inform you that by the end of this four-year programme, the goals set for the programme were not just met, but also surpassed in several cases. Through our work over these four years, we have been able to reach out directly to more than 1,86,000 people dependent on informal economy. 896 collectives of informal workers (against a target of 700) – with a total membership of 43,910 members – were formed within the said period to help them access social security measures. Of them, 16,713 members (38%) are now enrolled in their respective Worker Welfare Boards (61% are females). Besides, 16,545 members (38%) now have access to Central Government schemes (64% are females).

Moreover, 30,242 youth and women (against a target of 23,000) accessed basic skills and vocational skills training to enable them to improve livelihoods. Of them, 2,765 trainees got employed in related trades, such as retail marketing, IT and BPO, garment sector, household work, domestic work etc. Besides, 13,611 self-employed trainees reported an increase in their income levels.

The development of Working People’s Charter was another major outcome of this programme. The Charter process helped in building networks of various collectives, civil society organizations and activists working with informal workers; and in developing a consensus around their key demands, followed by dialogues with concerned stakeholders, including different levels of government, towards defining concrete policy and legislative measures in favour of informal workers.

Besides, with an objective of creating a knowledge base and information-sharing platform to train civil society actors working with informal workers and government officials for two-way linkages between grassroots work and policy-level knowledge, an Urban Action School was established under this programme. Bringing together activists, urban planners, academics, government officials and representatives of workers’ collectives, this forum enabled the cross-pollination of ideas among different practitioners and facilitated opportunities for a critical review of policies and legislations affecting informal sector workers. Under this component of the programme, several intensive and tailored theme-based courses (long as well as short ones) were also organized.

A series of reports also emerged from the project dealing with issues related to people dependent on the informal economy. These include a report of social security for informal workers: Social Security for Unorganised Workers in India. Two reports on cities and urban governance from the perspective of urban deprived communities who are largely the informal workers, these are Smart Cities and Urban Deprived Communities: A study of Bengaluru, Bhubaneswar and Lucknow and Urban Governance For Whom?: A study on public amenities and land use in Guwahati city. Besides three reports were published sharing the lessons emerging from engagements with domestic workers, construction workers and street vendors; these are: Ensuring Decent Work and Dignity: A review of engagement with domestic workers across seven States of India, Building Collectives to Secure Rights & Access Entitlements: A review of engagement with construction workers across six States in India and Enhancing Livelihoods, Building Collectives: A review of engagement with street vendors across eight cities of India.